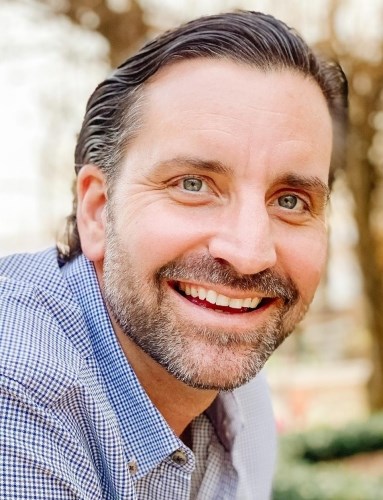 One of San Diego's brightest young stars in the real estate development industry, Kevin Ryan McCook passed away peacefully at home on June 17, 2021 with his family at his side. Kevin fought a heroic four-year battle with cancer. He was 40 years old.

Kevin was born at Sharp Memorial Hospital. He attended Circle Preschool, St. Kierans, Montgomery Middle, Granite Hills High, Grossmont College and received his degree from UCSD. He was active in many sports including baseball, riding, swimming, and water polo. He achieved many awards for his dedication and was All American in both water polo and swimming. Kevin won multiple world titles in the Morgan horse world in park harness and pleasure driving, and a gold medal for hunter equitation. While at Granite Hills High he met the love of his life, April Joy, on the swim team at the age of 17. After graduating from college he reunited with April and got engaged in August of 2005. Shortly afterwards they were married on March 18th, 2006, and welcomed their three beautiful sons Ryan, Gavin, and Rhys, who were the pride of Kevin's life. Kevin's impact on those around him was evident at an early age; everyone loved him, and that carried over throughout his entire life. Childhood friend Michael Pepin recalls, "I've loved you since the first day I laid eyes on you in 6th grade homeroom. I didn't know anyone; it was a new school at an awkward age and I soon realized I just wanted to be your buddy. I remember thinking how cool you were. Then they announced you were some kind of world champion for riding a horse and I looked at you and asked "horseback riding?" You looked at me with your one-of-a-kind smile and I loved you ever since." Kevin's devotion to his family was the centerpiece and foundation of his life. He focused all his love and attention on his remarkable wife and their three beautiful boys: Ryan, Gavin, and Rhys, who is afflicted with a progressive genetic disease that leaves him unable to walk on his own. Family and friends admired Kevin's unwavering passion for making Rhys feel included in everything, and his ability to challenge Rhys to push through and meet new goals. At their home in San Marcos, Kevin and April were celebrated for their easy-going style and flair. Known as generous and gracious hosts, Kevin and April lavished friends and family with love, elegant cuisine and a carefully curated collection of wines. An avid foodie, Kevin loved to create new recipes and was an incredible chef in full command of the kitchen, grill and smoker. Around the neighborhood, the McCook's decorated golf cart was a highlight of holiday festivities. Although their home was a constant bustle of activity, Kevin loved the simple pleasure of going in the jacuzzi with his family.

Kevin's wide circle of friends included golfing and hunting buddies with whom he would often travel to play new or favorite courses, or to enjoy seasonal hunting trips in Baja.

Kevin was one of the earliest members of the Building Industry Association's young generation of leaders, and entered the business after graduating from the University of California, San Diego in 2003. He worked in financial analysis at ColRich Communities, then land acquisition at Pulte Home Corporation before joining Shea Properties in 2006. Rising from his first position as a local Development Manager to Vice President of Retail Acquisitions and Development for Shea's statewide operations, Kevin was known as one of the smartest retail developers in the industry."

Kevin was a beloved member of our leadership team and an incredibly talented developer," said Colm Macken, President and CEO of Shea Properties. "Kevin knew everyone in the business, and everyone loved being around him. He radiated joy and he had an infectious sense of humor. Losing Kevin broke our hearts and not a day will pass when we won't miss his beautiful spirit."

Kevin's degree in business and political science no doubt helped him lead the successful development of two of Shea Properties' most high-profile, signature properties in San Diego: Bressi Ranch in Carlsbad, and Mercado Del Barrio in Barrio Logan. Kevin's role in that project was highlighted in a July 12, 2011 New York Times story showcasing the 311,000-square-foot Mercado Del Barrio redevelopment. Kevin's integrity and spirited enthusiasm facilitated a comfortable trust-based relationship with community leaders and stakeholders during the years-long development process at each project. He stayed engaged with those communities long after each project's completion and worked tirelessly to make sure that tenants were successful and part of each center's ecosystem. Kevin succeeded in almost everything he was involved with but his greatest joy was his family. He fought so hard so he could spend every living moment with them. Even when medical staff advised that there was no treatment left, he continued to fight for them until his very last breath. Thankfully his faith in Jesus was bigger than this disease, and his family knows that one day they will see him again. Kevin is survived by his wife, April McCook; sons Ryan, Gavin and Rhys; father Michael McCook; mother Ellen McCook; stepmother Vicki McWilliams; Father-in-law Joseph Mascari and mother-in-law Kimberly Mascari, and Kevin's beloved brothers, sister, nephews and nieces. With our thanks and in lieu of flowers, please consider a donation to the family's GoFundMe campaign, or to the charity seeking a cure for the disease afflicting Kevin's son, Rhys. A Celebration of Life will be held at The Santaluz Club. To contact the family, please email: davidjzarra@gmail.com