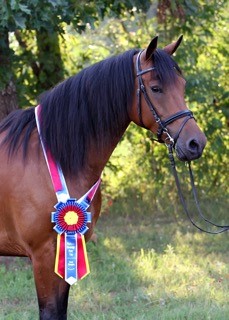 The National Dressage Pony Cup Championships, held July 7-9 at the Kentucky Horse Park in Lexington, is open to all breeds of pony-sized horses and this year there were more Morgans represented in the various dressage levels!

DeAnn says, "The Dressage Pony Cup this year offered the small horse division, which is horses that are 14.2 to 15.2., Morgans are perfect for that division!  So exciting to have Dressage divisions where Morgans excel!"