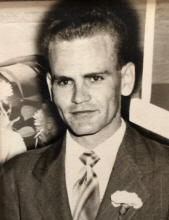 He was a loving husband, father, grandfather, great grandfather, brother, "Uncle Doc" and "Doc" to his friends. He will be missed by all.

In the fall of 1941 Francis entered Wichita University, Wichita, Kansas. Then in March of 1943 was called to serve and chose the U.S. Navy. Francis completed his basic training and then sixteen weeks of Radio Operator Training. In December 1944 then was assigned to the USS Bluegill SS242. On March 5, 1946, Francis was discharged from the Navy and returned home to Wichita.

During the fall of 1946, Francis re-entered Wichita University. He graduated with a B. A. in Bacteriology and Chemistry. He completed his graduate work for a Master's Degree at Kansas State University, Manhattan, Kansas in 1950.

Francis was awarded a Ph.D. in Microbiology and Chemistry in 1953. In 1954 he was elected into the Society of the Sigma XI (Honorary), Kansas State Agricultural College.

From 1953 to 1954, Francis worked for the Cudahay Pharmaceutical Laboratories in Omaha, Nebraska.

From 1954 to 1961, he worked for the Pitman Moore Company in Zionsville, Indiana as the Production Head for the Salk Polio Vaccine, Human and Veterinary Cell Culture Vaccines and Central Supply Systems. He was an Assistant Professor at the University of Missouri, Kansas City from 1961 to 1962.

He returned to the business sector in 1962 to 1987, working for Philips Roxane in Saint Joseph, to scale up the Human Measles Vaccine.

He was also involved in The Carriage and Driving Society of Greater Kansas City, The Saint Joseph Historical Society, volunteered at The Patee House Museum in Saint Joseph for 11 years and he also enjoyed seeing children learn how to swim and ride horses at the YMCA.

Francis's Navy Submarine experience provided the motto for his life: "Keep an Even Bubble."

Online guestbook and obituary at www.meierhoffer.com.