Congratulations to the 2019 AMHA Youth of the Year Winners! 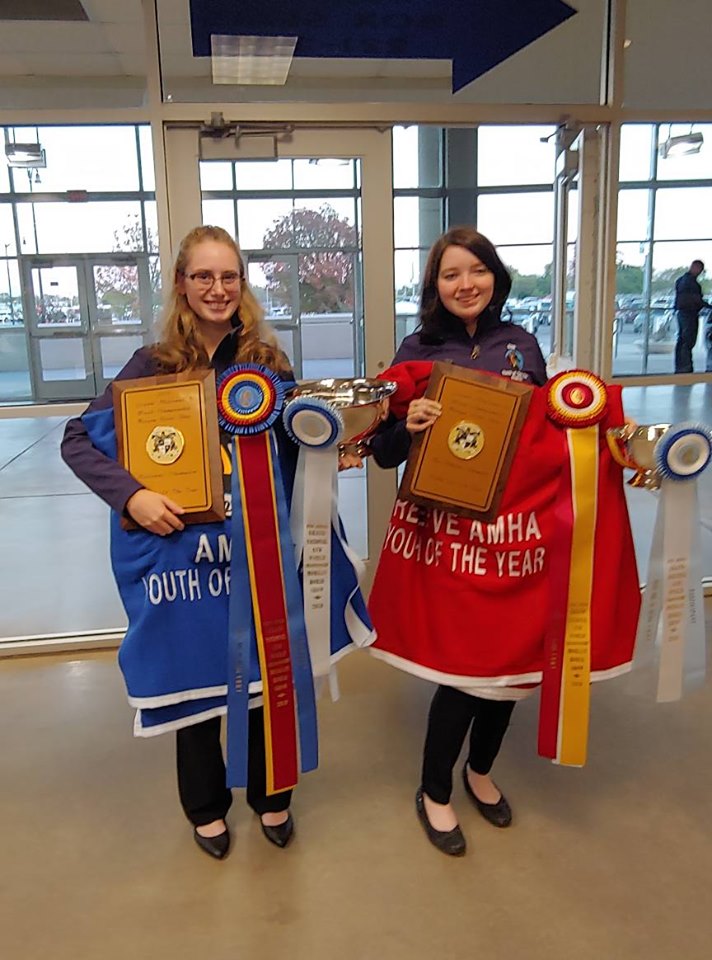 The 2019 Grand National Morgan Youth of the Year awards took place from October 16th, to October 20th on the Oklahoma State Fair Grounds in Oklahoma City. The Youth of the Year Contestants qualify for this competition by winning a local contest or scoring over an 800 final score. The winner receives a fabulous prize package of $3500 to be used for ambassadorship, stewardship and education, and rewards of their choosing. They also receive a large silver trophy bowl, Grand National cooler, their name on the youth banner which hangs over the Colosseum every year, and the prestige of being the AMHA YOUTH OF THE YEAR. The Reserve winner receives a $1500 prize package, as well as a silver trophy bowl and Grand National cooler. Contest includes a 250 question exam on horse and Morgan related topics, a horsemanship pattern, a judging contest, as well as give a speech on a horse related topic. The process starts 6 weeks before the Morgan Grand Nationals start.

Thursday kicked off the speech portion for both Youth of the Year contestants and the Junior Invitational. The Juniors' speech topic this year was “Your Morgan Horse wants to take a vacation! Where would he/she go? What would they do? What are some adventures you will have together?” They had terrific and creative ideas, also included were great visual aids including photoshopped images of their horses at the Eiffel Tower! Seniors then followed up with their 3-5 minutes speech. Their topic this year was “Horse Shows have been trying to think outside the box to reach more exhibitors and grow their show. Some have added divisions, some have reduced divisions to grow each class. Others have changed venues; some have added hospitality and/or prize money. How would you grow the horse show industry as a whole and per show? How would you grow the Morgan segment? What would you add/change to appeal to more exhibitors and new people?” The contestants brought insightful ideas and creativity to their speeches! Special thanks to Steve Handy, Sue Jannson, Marla Miller, Kris Breyer, Mari Sanderson, Leitha Stone and Carrie Mortensen for judging and timing!

The judging contest was held on Friday with two in hand classes and two performance classes. Contestants then had to give reasons on their decisions. Special thanks to Cindy Mugnier for being our judge, also to Celia Salmon, Selina Cloutier and Sophie Proctor for judging the reasons. Also this portion of the contest would not be possible without some amazing barns who volunteer their horses year after year to help with this contest. Special thanks to Grace Jacobus, Alex Goins, Majic Stables, Scott Nevers, Dallas Bolen, Sarah Krygeris, Sebring Stables, Kelly Adams, Cheryl Manahan, Bert Earhardt, Kim Thomas, Valerie Place and Connor Farley for getting up extra early to bring their horses to our contest.

Friday Evening was the Youth Gala where all exhibitors enjoyed dinner and dessert as well as received all of their individual awards. Junior Invitational was pinned overall with Jacqueline Schatzberg as Champion and Mollie Tuten coming in Reserve Champion.

Saturday evening the 19 Youth of the Year contestants were welcomed into a ceremony center ring to pin the top six! Coming from the Gold Cup Horse Show this year’s Youth of the Year Champion was Taylor Hudson with an incredible score of 885! Reserve Champion came from New England Regional and for the second year in row was Clea Clouter who was close behind! A record breaking eight contestants scored over 800 points!

Rounding out the top six places this year were:

Special thanks also go to Steve Davis and Fay Lowry for judging the Horsemanship Patterns. Congratulations to all who competed for these prestigious awards!

AMHA would like to officially thank US Equestrian for this year’s Youth Sportsman’s Grant Award that made it possible to extend assistance to many of the eligible contestants to participate in the National Youth of the Year Contest held at the 2019 Grand National & World Championship Morgan Horse Show. These grant monies allowed AMHA Youth to experience the amazing opportunity to further their education, exhibit their equine talent and practice good sportsmanship on a National Level. AMHA and the youth benefactors is sincerely grateful for this support.