Origin of the Morgan Horse 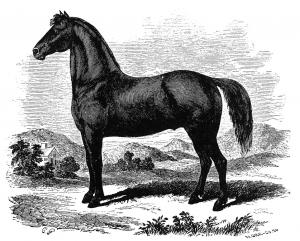 Justin Morgan was a teacher, composer, businessman, and horseman who had moved to Randolph, Vermont, from Springfield, Massachusetts. He acquired a bay colt, born in 1789, giving him the name Figure. As was the practice of the day, Figure became known by his owner's name, the Justin Morgan horse. This colt was the founding sire of the Morgan breed.

While his true origins remain hidden in history, Figure is thought to have been sired by True Briton, a horse widely respected for his excellence and known as a sire of quality horses. Figure's dam, was "...of the Wild-air breed, of middling size, with a heavy chest, of a light bay color, with a bushy mane and tail - the hair on the legs rather long, and a smooth, handsome traveler." His ability to outwalk, outtrot, outrun, and outpull other horses were legendary. His stud services were offered throughout the Connecticut River Valley and various Vermont locations over his lifetime. However, his most valuable asset was the ability to pass on his distinguishing characteristics, not only to his offspring, but through several generations.

After Justin Morgan's death, Figure moved on to other owners and spent a life working on farms, hauling freight, and as a parade mount at militia trainings. He spent his life working and died in 1821 from an untreated kick received from another horse. His three most famous sons--Sherman, Bulrush, and Woodbury—carried on his legacy to future generations of Morgan horses.

If you want to learn more about the important role the Morgan played in history, download this Historical Information Packet.

About The Morgan
Top