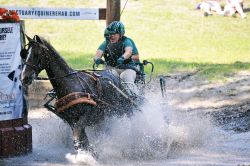 The sport of combined driving was standardized in the 1970s under the guidance of HRH Prince Philip, Duke of Edinburgh.  Combined Driving was formatted based on a similar structure as ridden three-day eventing.

In its best-known format, combined driving consists of a three-phase competition, which includes driven dressage, marathon, and cones. Each phase is designed to test the skill of the driver and the obedience, stamina, and athleticism of the horse.  Scoring is based on a penalty system, and the entry in each division with the least number of penalties at the end of the event is the winner. There are also modified versions of combined driving events, including driving trials, arena driving trials, and driving derbies.

Classes in a combined driving event may consist of singles, pairs, tandems, unicorns, or four-in-hands, and each of these classes are usually offered for horses, ponies, and even very small equines.

The driven dressage phase is akin to ridden dressage, with the elements of the German training scale being the foundation.

The second phase consists of a marathon, consisting of a cross-country course to test the horse’s fitness, stamina, and agility as well as test the driver’s judgment and ability.  Each obstacle encountered on one section of the course is timed for speed and accuracy as they proceed through lettered gates in the correct sequence at high speed, often with several tight turns.

The last phase consists of the cones course, which consists of up to 20 sets of numbered cones set in an intricate pattern, with tennis balls on top of each cone and narrow clearance between the carriage wheels and each pair of cones.  Penalties are given for knocking cones or balls down or time faults for exceeding the allowed time.

Together, drivers and equines form a cohesive partnership. One of the most notable features of the Morgan breed is their unbreakable bond with their people. Morgans excel in combined driving because of their intelligence, agility, and their intense desire to please their driver.  Morgans are also very athletic and are able to deliver speed and stamina while anticipating the next command from their driver.

About The Morgan
Top