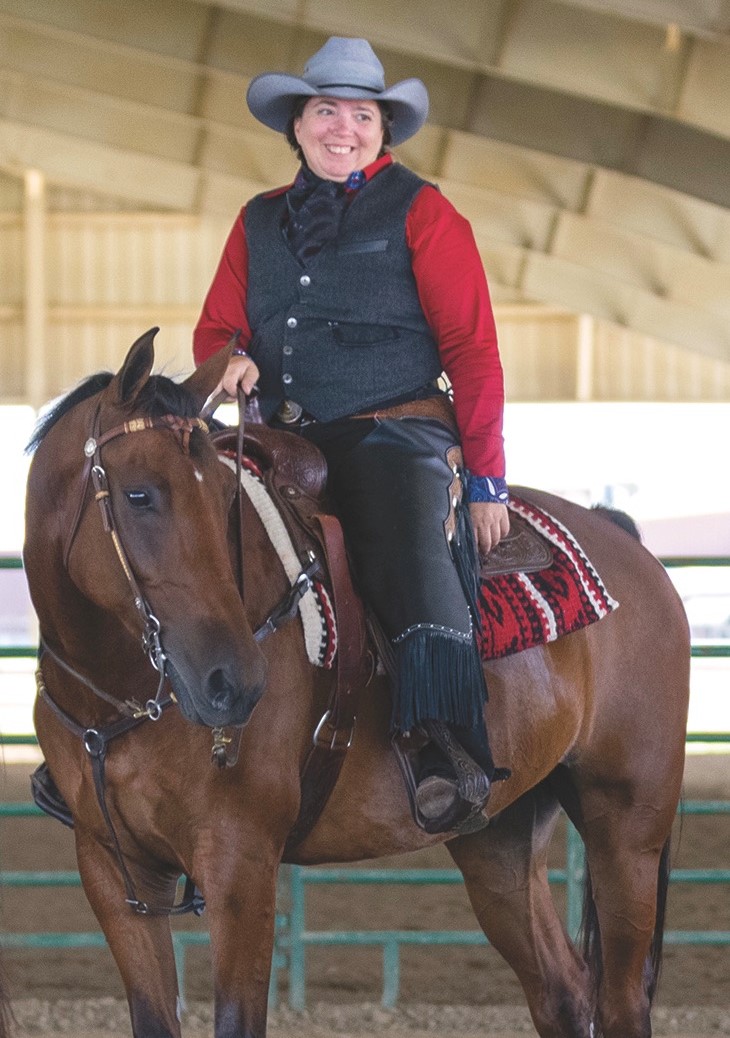 Leah’s involvement with Morgans began in the 1950’s with her grandfather. Her parents continued the involvement, and she was hooked on Morgans early in life. Her family bred, raised, and trained all of their own horses. “Growing up in central Pennsylvania, for me, it was on the back of a Morgan,” said Leah. Her first project horse was a Morgan named LS CRESCENT BLUE. He foaled when she was just 14 years old, and she had him with her for 32 years. The team competed in everything from Western Pleasure to Classic Pleasure. He was there at her first attempt at Dressage, too, competing at a local show and earning a score of 62.4!

Her love of Morgans continued and in December 2016, BOXWOOD BA ZZINGA (Jackson) entered Leah’s life and she began working with him with the goal of going to the 2018 Grand National in Western Dressage and Hunter Hack. Organizing several Dressage clinics on her own and with the Indiana Morgan Club, Leah worked with instructors Betty Ortlieb, Shelley Kaczmrczyk, and Michelle Blackler. Leah was usually the only one with a Morgan there. Then in 2020, HEEBIE JEEBIE (Hootie) was purchased by Leah for her boyfriend as a trail horse. She immediately recognized that he was a very talented horse and with time and tender loving care, Hootie returned to his former show-horse self. The two of them began competing in Intro Western Dressage at the Indiana Dressage Society schooling shows, consistently placed in the 60’s. Working with instructor Dana Jones, the team improved and competed at the 2021 Morgan Grand National with 2 top 10 placings in Intro Western Dressage. Hootie also earned high accolades in Western Dressage from the Indiana Dressage Society. Leah said, “Hootie received High Point in Classical Intro, too, making him the only horse in the entire organization to compete and place in both Classical and Western, showing the outstanding versatility of the Morgan horse.”

Thank you, Leah, and all our applicants, for your dedication to learning and promoting the beautiful discipline of Western Dressage. You are awesome Morgan ambassadors, and we wish you the best in 2022!

Applications for the 2023 Ellen DiBella Western Dressage Scholarship will be due by November 30, 2022.